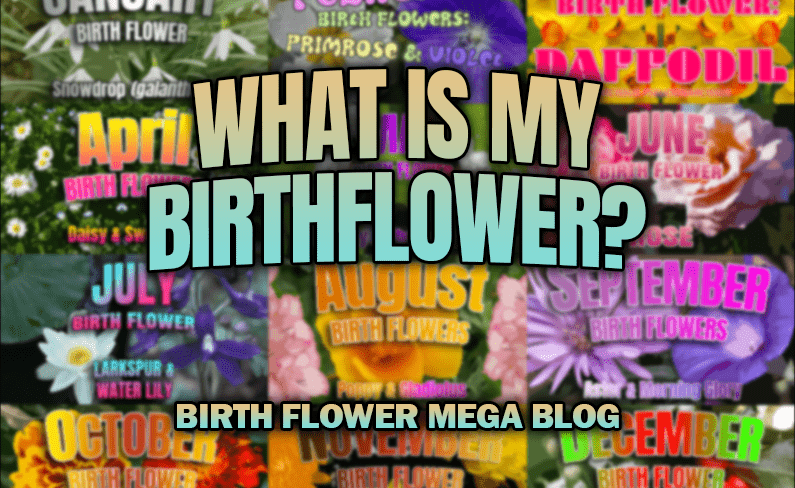 Have you ever wondered “What is my birth flower?” Well, you are at the right place to find out what your birth flower is, the spiritual meanings, and medicinal facts. We have compiled all our monthly birth flower blogs into one awesome MEGA blog where you can click on each link below the Monthly Birth Flowers to learn even more! 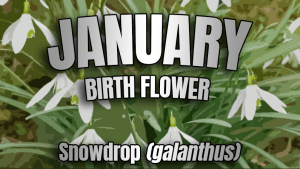 This Flower has been written about for many generations with its earliest notation around 400bc. In 1597 it was first put into a classification. In 1763 the flower was then assigned a family. This flower was first thought to be from Great Britain but was later traced to the middle east and southern Europe.

The Snowdrop was a bad omen meaning death and misfortune will come your way. This has now changed and many see it as a sign of Hope & Purity. 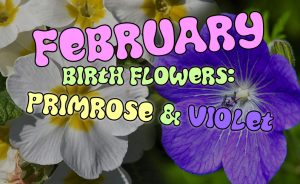 The Violet typically starts to bloom in early to mid-spring in the Northern Hemisphere. This beautiful flower is known for its deep purple and lavender colors through its five heart-shaped petals; four of which bend up and one dips down. With no noticeable stem and scalloped leaves, this flower is easily identifiable.

The Primrose quickly blooms in early spring and will even bloom a second time in late fall. Commonly mistaken for a relative of the rose, this flower is not related at all! Common colors are yellow, pink, and purple. However, there are a lot of hybrid colors. All primrose flowers have one common trait, the yellow eye in the center.

These are the types of flowers that you would want to give someone to let them know that you can’t live without them. The flowers symbolize life, new beginnings, and youth. 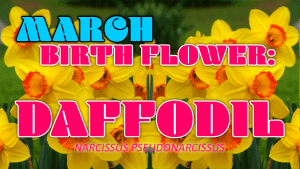 The Wild Daffodil is the biggest flower in the Narcissus class. It usually has giant yellow flowers, long darker trumpets, and narrow leaves at the stem of the plant. This is a bulb flower, meaning that it can take five to seven years after germination to produce a flowering plant! 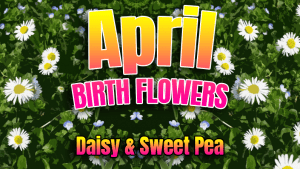 Daisy is most commonly found in fields, bordering flower beds, and is usually seen in nature as a ground covering plant. Native to Europe and North Africa this flower belongs to the Asteraceae family along with 32,000 other flowering plants!

Because of the simple beauty of this flower, its meanings are innocence and purity! Springtime is always a great time to start fresh, break out of winter, and get ready for the year! For this, the Daisy is also known to represent new beginnings! 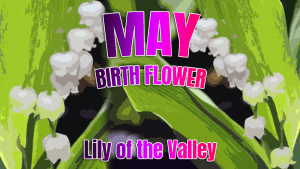 May Birth Flower: Lily of the Valley

In Germany, the first sign of the Maiglöckchen or Lily of the Valley is the official start of Spring. The Lily of the Valley is associated with Ostara, the springtime goddess, the banisher of winter! It’s believed that around the 15th century the Catholic church adopted this flower as part of their religious beliefs.

Hope, Motherhood, & Sweetness are the three meanings associated with the Lily of the Valley. However, the flower does have a ton of meaning all over the world and for different reasons. For example in marriage, this flower usually represents faithfulness and good luck! 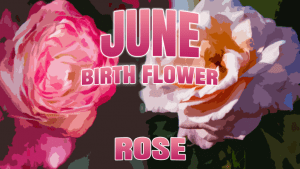 Did you know that Colorado is home to a 55 million-year-old rose fossil?! Yep, it’s true. The discovery was made in the Florissant Fossil Beds, if you are in Denver it’s only about a two-hour drive to check it out! However, that type of rose is not the kind you would see in a rose garden today. The common rose in North America is actually the “Chinese Garden Rose” brought over in the 18th century.

Often times roses are a way to convey messages and feelings without having to use words. Every rose color has a different meaning and there are tons of interpretations of each. Love, gratitude, enthusiasm, friendship, and joy. 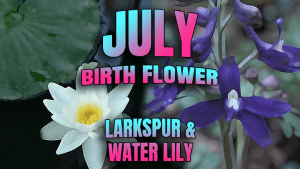 With a genus of about 300 different perennial flowing plants, it is hard to say what one is exactly the birth flower, so we just went with our gut and decided on the common “rocket larkspur” (Consolida ajacis) as this is the one most commonly seen in gardens around the United States.

This Water Lily belongs to the family Nymphaeaceae along with 70 other flowering plants. The roots of the Water Lily are bedded into the soil of bodies of water with the leaves and flower heads resting on the surface of the water. Studies have been conducted on this flower stating that it is genetically different than most flowering plants we see today!

The symbology of the larkspur has different meanings based on the color of the flower. Blue symbolizes dignity, white symbolizes happy nature, and purple symbolizes first love. According to Greek mythology when Ajax was killed in the battle of Tryo this flower blossomed where his blood touched the ground.

The most famous is Water Lily is the Lotus flower which is used in the Buddhist religion as a sign of absolute truth and purity. Egyptian paintings depict naked women holding blue water lily flowers which is a sign of fertility and creation. Most ancient cultures have associated white lilies with gods and spirituality. Delight, new life, happiness 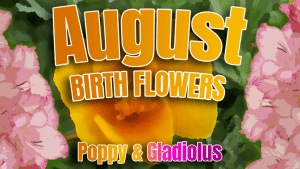 Red Poppy is used in Europe as a symbol of remembrance of WW1. The blood-red color of the poppies represents the blood spilled during the conflict. Remembrance Day will be celebrated on Wednesday, November 11, 2020, people will pin a blood-red poppy to their shirts in honor of the day and the fallen.

White Poppy represents sleep and death in Greek cultures due to the powerful sedative effects found in the opium poppy. Blue and Purple Poppies often represent wonder and imagination. Yellow/Orange Poppies help the heart and soul to gather light and warmth.

Gladiolus is known as “Sword” in Latin, due to the fact that it grows 2? – 5? long stems with less than 9 leaves in an inclosed sheath, looking like a sword growing out of the ground covered in flowers! More than 10,000 cultivars exist today. So many choices with endless color combinations. 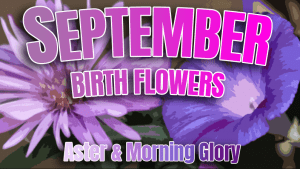 “What a beautiful STAR-shaped flower,” was most likely said by some ancient Greeks as this is where the name of the flower comes from! Looking at an Aster flower you can totally see why it might have been named after the stars. The “New-England” or “New- York” Aster are the two most common varieties of Aster and can be found in almost any garden later in the season due to its late bloom time. Asters are also a much-needed garden plant to help feed late-season pollinators!

The Morning Glory can be a super invasive plant if not kept with a watchful eye. In a single season, a Morning Glory can grow up to 15 feet long with many, many offshoots! Most commonly this flower is known for its bright purple/magenta trumpet-like flowers, but can be found in white, yellow, and pink! the Ipomoea tricolor will bloom from early spring all the way into late fall! 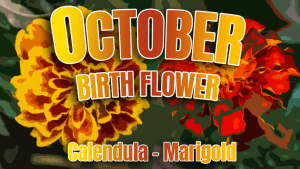 Pot Marigold and Marigold are both members of the Asteraceae family but are two different plants. Both with a rich history, great medical uses, and both are extremely beautiful. Marigolds were one of a few sacred flowers to the Aztecs and were used for their medicinal properties and decorations.

Colors are most commonly orange, yellow, and red and are associated with positivity and warmth due to the colors matching the sun. In some cultures, it represents new beginnings in marriage or jealousy in others. The most common symbology behind October’s birth flower is positivity and creativity! 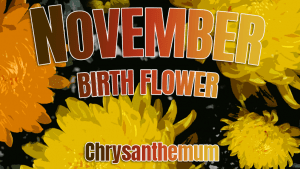 Known also as the “mum” or “chrysanths” which was cultivated as early as the 15th century BC in China. The ‘Chu’ as it was called in Chinese was highly valuable as a medical herb, so valued that they named an entire city to honor it! It was later adopted as an official seal of the Emperor and the national flower of Japan and the official flower of All Saints Day in Europe.

Most commonly the American meaning associated with the Chrysanthemum is innocence, purity, and love. In Japan, the Chrysanthemum (Kiku) symbolizes longevity, rejuvenation, and nobility. The mum is not to be gifted in Japan as it is a flower used for funerals and graves. Some European countries like Belgium, Italy, and France, see the Chrysanthemum as the symbol of death and is only to be used during funerals. 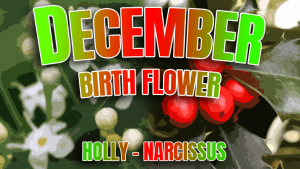 Ancient Romans would plant hollies around their houses and villages to protect themselves from potential witchcraft, unwanted spirits, and other evil forces. Pagan tradition says to throw a sprig of holly onto a yule log which is said to burn away your troubles from the past year! Yule takes place near the end of December which celebrates the end of nights getting longer and the start of daylight getting longer.

*All content on theheadedwest.com is not intended as medical advice, herbal healing, diagnosis, or treatment. We simply share information and history. Do not try herbal remedies at home without talking to a trained professional! Always seek a professional doctor for help.*