3 More of the Spookiest Spots in Colorado! 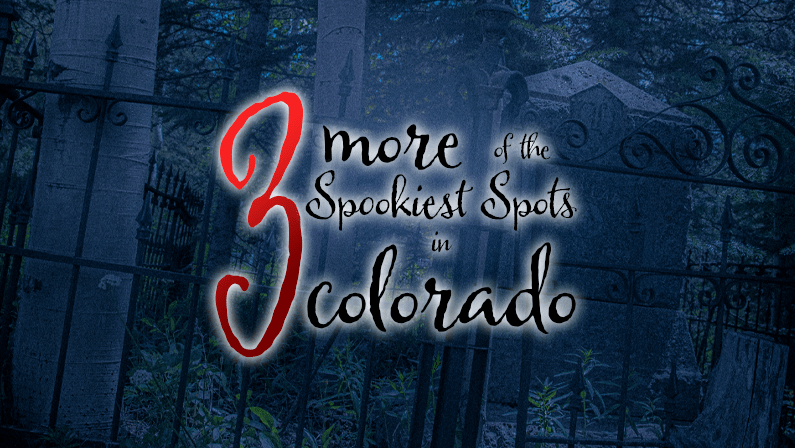 3 More of the Spookiest Spots in Colorado!

Tis’ the season of spooky and we are so excited to celebrate! Come on…who doesn’t like ghouls, ghosts, zombies, vampires, and the list goes on and on! Besides all the pop-up haunted houses and haunted hay-rides, what is really haunted in Colorado? Well, we came up with 3 more of the spookiest spots in colorado for you to visit!
Before you keep reading here make sure to revisit our last blog on The Eight Most Haunted Places in Colorado

3. Hotel St. Nicholas – Cripple Creek 303 3rd St, Cripple Creek, CO 80813
Cripple Creek lays home to tons of ghost and spirits sightings as it’s one of the oldest mining towns in Colorado. Once a bustling city for miners to sit back and relax, drink, and gamble their gold away, it’s now an awesome little gambling town with epic casinos and tons of old hotels!
Hotel St. Nicholas wasn’t always a hotel, it was first built as a hospital to serve prospectors and the mentally ill in the late 1890s. The hospital operated for about 80 years until 1970 then sat empty until it became a hotel in 1995. The hotel is home to two permanent residents named Petey and an unnamed miner.
Petey is known to be a mysterious young boy, probably an orphan who was cared for by the Sisters of Mercy. He has been known to move people’s small belongings, hide stuff in the bar, and flicker the lights. The unnamed miner has been seen walking up and down the stairs of the hotel and relaxing in the front office. Many other instances of paranormal activity have been noted here, so why not check it out for yourself?

According to many individuals, this beautiful manor that sits along Manitou Ave. is home to many ghosts and spirits. Few reasons are known as to why the manor is haunted but even the current owner confirms the hype is real!
During a presentation with 100 guests in attendance, an expensive vase flew from a table breaking on the floor with no explanation as to why it happened. Staff working on the property have told stories of apparitions appearing in the gardens. Such apparitions include a skeletal lady and a little girl wearing a bonnet that was playing with a ball.
This home was built in 1889 by Dr. William Bell, who was a huge part of the development of Woodland Park and is also known as the “father of Manitou Springs.” So it’s safe to say the property has been around a while and seen many people in and out.
The manor was featured on the Ghost Hunter show and the crew experienced paranormal activity firsthand. They were able to hear the running of footsteps in the attic and even picked up a child’s voice on tape! Spooky!!!
1. Patterson Inn – Denver 420 E 11th Ave, Denver, CO 80203
The Patterson Inn wasn’t always a hotel to stay in! It was built in 1891 as a Manson for Sen. Thomas Patterson, a civil war vet that became a Democratic senator in 1875. He died in this home on July 24, 1916, so could it be him that is still haunting the space? The new owners of the Inn say that “the Pattersons are alive and well” so to speak and that you should “Come to stay with them!”
In the 1970s the building, which was converted into an apartment building,  was going to be destroyed but a local realtor bought the property and gave it new life!  However, the realtor ran into a ton of problems keeping tenants staying there. People living there would just kinda get up and leave in the middle of the night. It’s suspected that they couldn’t handle the constant sound of a baby crying in the middle of the night.
The story gets even crazier from here! After the apartment escapade, they started to remodel the entire place into an office building. But they kept having problems with homeless people breaking into the place and trashing it. So what did they do? They tried to protect their property by putting three guard dogs inside the building to protect it.
On the first night, one dog jumped through a glass window from the third floor and died. The next night the same thing happened to another guard dog. They found the third dog shaking and trembling hiding in the corner of the third floor. These three guard dogs were terrified by whatever was inside. There are so many stories about this Inn that it was featured on the T.V show Portals of Hell. Would you stay here?!