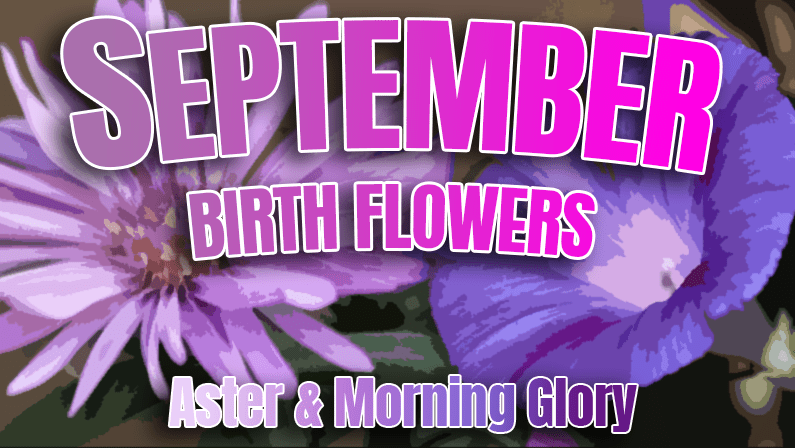 What a year, right? Summer is officially on its way out and we are about to welcome in Autumn.
September 21st is the official start of Autumn which brings us closer to shorter days with longer nights, cooler evenings, and final blooms of flowers. Speaking of flowers blooming, let’s guide you through the world of September’s birth flowers!

“What a beautiful STAR shaped flower,” was most likely said by some ancient Greeks as this is where the name of the flower comes from! Looking at an Aster flower you can totally see why it might have been named after the stars. The “New-England” or “New- York” Aster are the two most common varieties of Aster and can be found in almost any garden later in the season due to its late bloom time. Asters are also a much-needed garden plant to help feed late-season pollinators!

Breaking and sniffing the roots of the Aster novae-angliae has been proven to help clear excess mucus buildup and clear breathing pathways. Alternatively, making a hot steam bath with peddles is also a fantastic way to do the same! Making a poultice of the whole plant has been known to help with diarrhea and fevers. Never attempt to make a poultice without consulting with a certified herbalist first. When in doubt, leave it to the pros and shop at a local apothecary.

Sound the TRUMPETS on this drought-resistant vine plant because it is trippy!!! The Morning Glory can be a super invasive plant if not kept with a watchful eye. In a single season, a Morning Glory can grow up to 15 feet long with many, many offshoots! Most commonly this flower is known for its bright purple/magenta trumpet-like flowers, but can be found in white, yellow, and pink! the Ipomoea tricolor will bloom from early spring all the way into late fall!

This September birth flower belongs to a family of over 1000 different verities so it’s medicinal use varies from species to species. Ipomoea alba has been used in the rubber making process while the Ipomoea corymbosa seeds were used by ancient priests for its hallucinogenic properties. The Ipomoea batatas also know the Sweet Potato is a root vegetable that can be cooked and consumed and the Ipomoea alba can be used to treat snake bites!

Did you enjoy learning about September’s birth flowers? Well, we have a whole bunch more birth flowers for you to read about HERE! While we have your attention, why don’t you check out our September Sales Blog!