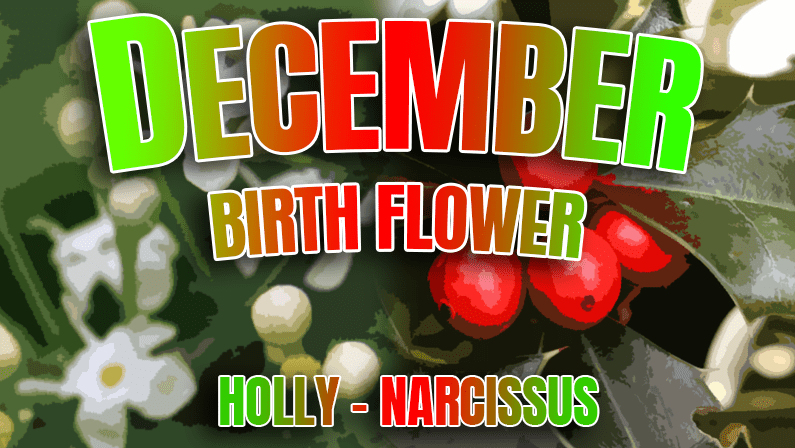 IT’S THE HOLIDAY SEASON!! PANIC PEOPLE!! Just kidding. Everything will be a-okay! Let’s start the last month of the year right by learning a little bit about the December Birth Flower! This month is mostly know for Holly, Poinsettia, and sometimes Narcissus. In this monthly birth flower blog, we will only be diving into Holly and Poinsetta as Narcissus is covered in our March Birth flower blog HERE.

Holly: A Short History of the December Birth Flower

If you have been reading our blogs about Pagan holidays and early festival celebrations this might sound a bit familiar to you. Over the course of history Druids, Pagans, Anglo-Saxons, and many other cultures have attached their own meaning to flowers, herbs, and plants. It’s no different for the holly bush! Over the course of history, the meanings and symbology have changed shape, lost traditions, and are now used as a symbol of Christmas in Christianity.

So who used what? Well, buckle in cause we are going to dive into that right now!

For centuries before Christianity, Ancient Romans would plant hollies around their houses and villages to protect themselves from potential witchcraft, unwanted spirits, and other evil forces. During the late months of winter, they would bring these shiny leafed plants inside as it was thought that it would help carry the sun and brightness through the long winter nights.

On the 17th of December, Saturnalia, an Ancient Roman festival was held to honor the Sun god Saturn in which holly was used as it was considered sacred to Saturn. These Romans would gift wreaths made of holly to one another as well as decorate images of Saturn as well.

Holly stems from the Anglo-Saxon word Holegn, the usage of this word was first noted in min 12th century. As the language developed over time the word eventually became Holly!

The Holly King gets its name from the holly bush with bright red berries and shiny green leaves that usually starts to flourish during the end of the summer/early fall. The Holly King is often depicted with a beard and crown made of holly leaves.

Pagan tradition says to throw a sprig of holly onto a yule log which is said to burn away your troubles from the past year! Yule takes place near the end of December which celebrates the end of nights getting longer and the start of daylight getting longer.

The Meaning Behind the Holly & Poinsettia

What does a Holly represent? Well, lots of things. As you learned above many cultures used it for different purposes but mainly for protection, eternal life, and fertility.

Poinsettias are said to represent success and bring well wishes during celebrations!

In modern times and herbalism, the holly is seldom used due to the discovery of more efficient herbs. Using only the leaves of the plant, made into a tincture, and used to aid in pulling mucus out of the lungs and lubricating the respiratory tract. The leaves brewed into a tea makes an effective fever reducer. It has also been known to be turned into a medicinal tonic.

The berries of the plant are highly toxic and should not be used, however, people have roasted the fruit and turned it into a coffee substitute. (This is not advisable as it can cause a laxative effect). Fun fact: the flowers can be used to ward off hatred, jealousy, and envy by creating a Bach flower essence.

Now that you know the rich history of Holly, will you be planting one and bring it inside this winter to protect it from evil?!

Looking for the best December sales in Denver? We got you over HERE!

*All content on theheadedwest.com  is not intended as medical advice, herbal healing, diagnosis, or treatment. We simply share information and history. Do not try herbal remedies at home without talking to a trained professional! Always seek a professional doctor for help.*