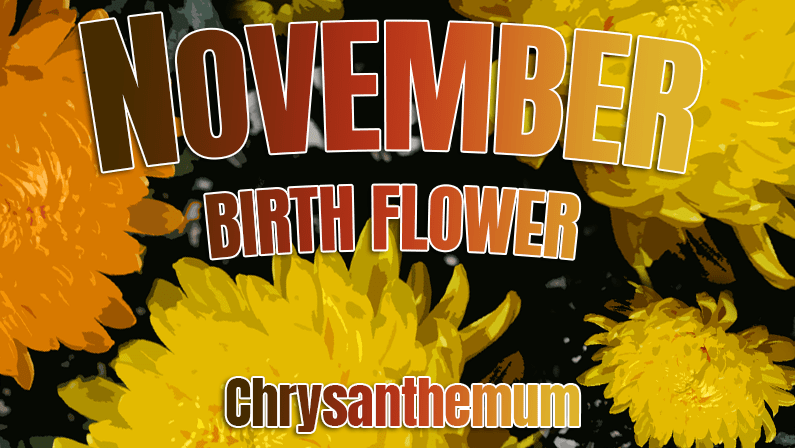 Well, it’s officially the Fall. All the flowers are gone for the year, daylights saving time is here, and it’s cold, cold, C-O-L-D! So we are gonna warm you up with the GOLDEN November birth flower!

One of the oldest and most popular flowers cultivated dates all the way back to the 15th century BC! So what is this amazing Golden Flower? Read below to find out!

Chrysanthemum: A Short History of the November Birth Flower

The November birth flower is the Chrysanthemum also know as the “mum” or “chrysanths” which was cultivated as early as the 15th century BC in China. The ‘Chu’ as it was called in Chinese was highly valuable as a medical herb, so valued that they named an entire city to honor it! It was later adopted as an official seal of the Emperor and the national flower of Japan and the official flower of All Saints Day in Europe.

In the United States, the flower first arrived during the late 1700s and became a common house-warming gift. Today, mum is the largest commercially produced flower. The reason this flower is commonly associated with fall time is due to the fact it blooms well into late fall and is one of the longest-lasting cut flowers!

Few flowers have an entire society dedicated to education, cultivation, and celebration, but the Chrysanthemum has its own non-profit organization! The National Chrysanthemum Society was first incorporated in 1954 and celebrates this flower with giant exhibitions each year! In Japan, the “Kiku-matsuri” celebrates the mum in late November.

The Meaning Behind the Chrysanthemum

As with most of the birth flowers depending on where you are in the world the meaning can vary quite a bit. For example in the United States, the mum was typically used with positive intentions while in Europe they are used for mourning.

Most commonly the American meaning associated with the Chrysanthemum is innocence, purity, and love.

In Japan, the Chrysanthemum (Kiku) symbolizes longevity, rejuvenation, and nobility.  The mum is not to be gifted in Japan as it is a flower used for funerals and graves.

Some European countries like Belgium, Italy, and France, see the Chrysanthemum as the symbol of death and is only to be used during funerals.

Medical Uses of the Chrysanthemum

We know this flower has many different meanings and is widely cultivated around the world for many different reasons, but what can it be used for medically?

Brewed into a tea the flower is great for high blood pressure, reducing fever, colds, and even headaches! In fact, this is a very popular summer drink in southern China.

Chrysanthemum increased blood flow to the heart and also increases sensitivity to insulin so it is very helpful for those with type 2 diabetes.

Growing these plants inside your house is a great aid to remove airborne toxins and removes chemical vapors!

Looking for the best November sales in Denver? We got you over HERE!