The Eight Most Haunted Places in Colorado 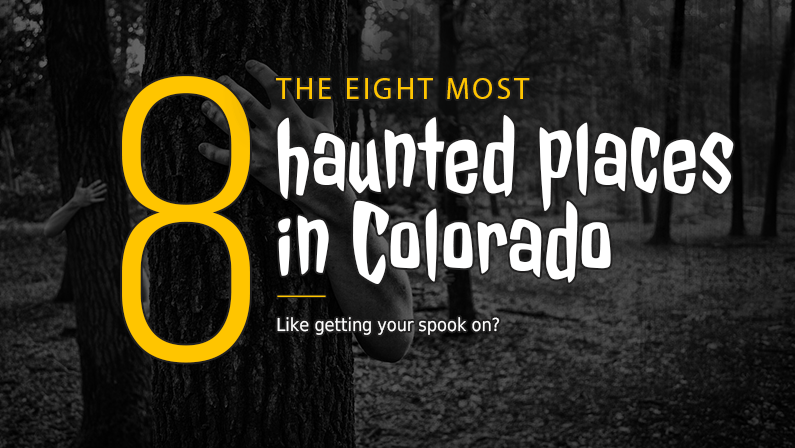 It might only be September, but it’s never too early to start thinking and preparing about Halloween. I mean, let’s be honest here… we’ve all been thinking about Halloween 2018 since last Halloween. It’s just such a freaky awesome holiday and we dig it – all of it. Fall not only brings the beauty of changing leaves and cooler weather, but it also brings a spooky calm feeling to the world. We feel like haunted stuff is super awesome during this time of the year. Since the cool crisp is starting to hit the air here in our lovely state, we figured this would be the perfect time for you to check out the eight most haunted places in Colorado.

Get yo’ spook on!

Built in 1893, this hotel is known for its’ ghostly apparitions. There is a phantom smell of cigar smoke in the lobby, the elevator seems to have a “mind” of its’ own, and the ghost of a murdered chambermaid is said to haunt the Devereux room at night. Stay here and keep your eyes peeled for the many other apparitions you might come across in this spooky old hotel.

The ruins of this old stagecoach station built in 1861 is haunted by a gray lady named Kathleen Cooper. Her ghost has been seen at the station in a gray wedding gown waiting for her love, Julian LaSalle. LaSalle was murdered on the way back to Penrose, CO and never showed up for their wedding day. Kathleen stopped eating and drinking and eventually passed away due to self-imposed health issues.

Have you seen the movie The Shining? If so, the you know all about the Stanley Hotel since it was Stephen King’s inspiration for the best selling book (and later movie). This iconic hotel located in Estes Park was not only the shooting location for Jack’s crazy ax murder spree, but it’s actually a real-life haunted hotel. It’s a GORGEOUS place to stay and will most definitely give you the creeps. *There always neat spooky stuff going on at the Stanley. In October, two events to note are:
1. A murder mystery dinner coming up on October 19th.
2. Halloween Masquerade Party on October 27th.
Grab tickets fast as these spooky events are sure to sell out quick.

Across the street from a working prison lies the old in Canon City, CO. Patrons visiting the now museum report creepy cold spots throughout the place and a lingering phantom tobacco smell. The sound of coughing from a deceased female prisoner is said to be heard when passing by Cell 19, so make sure to listen extra careful while you’re there.

In the heart of Denver lies beautiful Cheesman Park. Now used as a multi-use recreational area, this park had a ghostly start. It’s on the old Mount Prospect Cemetery grounds, founded in 1858. It was decided to turn the area into a part and families of the buried there were given 90 days to have their loved ones remains moved. Many of them were poor and could not, meaning there are still bodies buried underneath all that lovely green grass. It’s super creepy at night folks, seriously… Check it out.

Cripple Creek, CO is a haunted town, period… but one of the more haunted places in this creepy place is the Colorado Grande Casino & Hotel. Built in 1896, this old hotel is home to many ghostly apparitions, the most famous of them named Molly. She is said to smell of roses and can be seen playing slots with another unnamed male ghost.

If you find yourself staying at the Hotel Jerome, make sure to ask for room 310. It is said to be haunted by the ghost of a little boy who died while swimming in the hotel pool. He will show up wet and shivering from the cold, only to disappear leaving a trail of wet footprints. He’s not the only ghost on the premises though, so come prepared to be spooked!

About 35 miles west of Denver lies the now decaying Central City Masonic Cemetery. First brought into use in the 1860’s, this haunted cemetery in the middle of the Rockies is home to a very romantic and sad ghost. It is said that every April 5th and November 1st, a beautiful young woman in a black satin gown will visit the grave of her lover, John Edward Cameron, and put flowers on his grave.

If you’re looking for some spooky local fun, consider checking out the event Downtown Walking Tours: Ghosts of Downtown on October 5th. You can find out more information and get tickets on the Facebook event page. There’s also a bunch of haunted tours you can take almost any time of the year. Here’s a list of a few companies offering them in Denver: